There are a zillion books that make use of Fritzing to illustrate circuits, but this one is the first on fritzing itself. We're honored that the one and only Simon Monk, author of many a maker book, took it up and created the ultimate guide for using fritzing to "take your electronics project from prototype to product." We provided technical review for the book, so you can be sure it's using all the tricks. It does a really great job at  giving a quickstart introduction. Then it walks you through each of Breadboard/Schematic/PCB view in detail, and also gives you background tips on approaching electronics projects in general, reading datasheets, etc. The second half of the book focuses on PCB design and production all the way to testing and distribution. It's all very thorough and keeps a great balance between bird's eye and detail discussion. So it's not just a  software reference, but a really practical handbook on creating prototypes and using Fritzing as the central tool for that. All in all, "Fritzing for Inventors" might be a great holiday read. Here's the full table of contents (the one on the publisher's website seems to be from a draft version):

It's the time of the year again and we are happy to announce a new release featuring a brand new "Code View" that allows you to program and upload to your microcontroller straight from Fritzing. To celebrate this, we give you a nice discount on the perfect christmas gift, the Fritzing Creator Kit. Use the discount code FRITZMAS14 to get the kit for 89€ (instead of 95€) and make someone (or yourself) really happy this year. :) Read  more on the release below. This is the new "Code View"! It lets you write your code directly inside Fritzing, and even upload it from there to your microcontroller. It even has a serial monitor. :) We love this, because it makes it even easier for beginners to get started with interactive electronics. And for more advanced people it's great because you can now keep your code together with the matching circuit--no more confusion! You can also link to files somewhere else on your hard drive, for example in your local Arduino folder. When the link gets broken, or you just send someone your Fritzing file, don't worry, because there's always a backup stored in the Fritzing fzz file. Right now the upload functionality supports Arduino and PICAXE, but more can be added as long as the platform's IDE has a command line upload option. The new release also brings with it many new parts, many kindly sponsored by their respective makers. Now you can easily document your circuits and fabricate shields/caps/hats etc. for: Last but not least, the new release fixes a couple of annoying bugs and generally makes it easier for you to contribute to the code. Setting up your build environment is now just a few easy steps. See the full release notes here. Download Fritzing 0.9.1b from here, and think about a Fritzmas donation on the way to it. Happy Fritzmas to everyone! 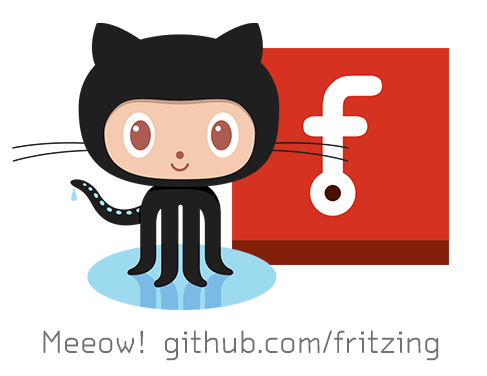 It took us a while, but we have finally decided to move all Fritzing code to the amazing github. Find it now at:

When we started hacking on Fritzing back in 2007, Google Code was all the hype, and SVN had just replaced CVS as a versioning system. All this has changed for good, and today git (and github) have become the reference for collaborative, open-source development.

We were hesitant until now mostly because of our issue tracker: The one at Google Code has served us wonderfully, and the one at github lacks many of the features that we have come to love (like file attachments and powerful tagging/prioritizing). Also, with the move, original issue reporters will not be notified of changes. Ouch. Luckily, all issues have a backlink to their original Google Code issue, so at least the full history is preserved.

We have also taken the opportunity to move our developer docs over to the github wiki. This way it’s all in one place and you can directly edit it if you have enhancements.

So, we welcome all developers to take a look, watch us, star us, fork us, and most importantly, send us pull requests!

We just noticed that the Linux release did not contain the latest patches, most notably it is missing the Linino boards, an issue with number boxes in languages using comma as decimal separator, and a schematic issue.

The downloads have now been refreshed, so we recommend all Linux users who have already downloaded 0.9 to update. Sorry for this extra step!