Our colleagues at design studio IXDS will hold a workshop during Mobile World Congress next week in Barcelona. Together with tech company Rambus and facilitator MLOVE, the workshop will investigate the opportunities of Rambus' new image sensors. They are so tiny, inexpensive yet powerful, that they can be integrated into almost any IoT device. The workshop will take place on coming Monday, March 2nd. If you're lucky enough to have a ticket for MWC, the workshop itself is free. Just RSVP to the mail address in the invitation.

Hey hackers, engineers and designers! Your chance to WIN A TRIP TO SPACE!

The DIY page Hackaday.io offers a maker competition where you can actually win a trip to space (or take the cash option of nearly $200,000 instead)! Even if you don’t win the Grand Prize, to be left with a milling machine, 3D printer, a flight to Japan or or or is not too bad either.

But what do you actually have to do? The hackaday guys wondered about that too: „We’ve been vague up to this point on purpose, because spouting specific categorization stifles creativity. We want you to Build the Future — not fit inside of a tiny box made of disqualifying restraints.“ So your official task is to build the next evolution of hardware.

Heat up your soldering iron and start hacking!

Hello friends of Fritzing in Seoul! Guess who’s in town?

It’s Fritzing co-founder and godfather Reto :) He is visiting Seoul from today till Friday 6th of December and  he will be more that happy to meet you and chat with you about Fritzing, what projects you use it for, how you use it, your feedback, suggestions to improve our products and services offering, and if you are nice (which you definitely are) he might even offer you a goodie.

For those who don’t know Reto, he is someone who’s incredibly passionate and smart about everything he does (especially Fritzing), but here is a short summary of what he does: Reto is the founder and design director of IxDS, responsible for the overall design strategy. He is a Professor at the University of Applied Sciences in Potsdam, where he teaches “Physical Interaction Design” and researches innovative, bodily-focused approaches to Human-computer interaction. Reto has previously worked as an Associate Professor with the Interaction Design Institute in Ivrea, and as a designer/researcher with Sony in Tokyo and Ideo in San Francisco. He studied Industrial Design at UdK Berlin and Mechanical Engineering at TU Berlin. Prior to his studies, Reto had an apprenticeship as a stonemason in Southern Germany.

Drop us a comment and we’ll get you in touch with him ;)

Fritzing at the MakeTechX conference 2013 – for the first time Fritzing had a booth at the „conference of tech things that matter, where those who make a difference meet, think & create.“ What a nice slogan, and nice it was indeed. 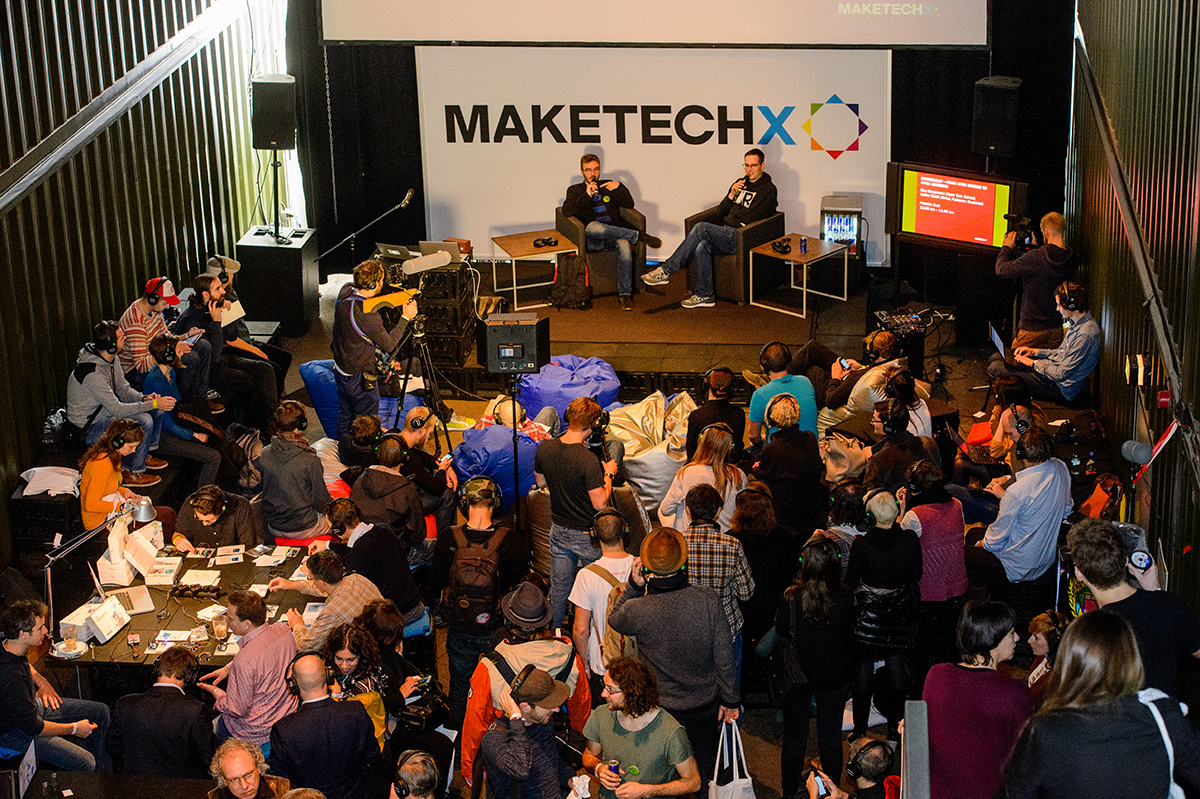 For me it was the first conference I could attend with Fritzing and so I was superexcited and curious what would await us there. We met in the morning at our „headquarters“ to pack some last things and finally hailed a taxi at 9 a.m. to drive to the Platoon Kunsthalle in Berlin Mitte where the conference would take place. This was already a great start to the day, our taxi driver seemed to like entertaining his passengers and gave us a lot of secret insights into the Berlin taxi business and we will definitely follow his advice to not only try Red Bull with vodka but also with cherry brandy.

The Platoon Kunsthalle is a very interesting building – actually it is more like a huge and fancy cargo container, created as an experimental space for artists and therefore perfectly fitting the location just next to the White Trash.
The interior felt surprisingly comfortable, the front part consisted of the – definitely necessary to mention – gorgeous café-restaurant-sort of thing with a nice sitting area and the larger back served as presentation and workshop area. There were several booths, and we had one of them! Besides us there was also the Open Tech School, Bitcoin, the Fab Lab, who brought us there initially by ordering some very special Fritzing Kits in a metal case to do an Arduino workshop, and many more, including and not forgetting a whole lot of 3D printers and a transformable mountain/racing/citybike! Awesome! 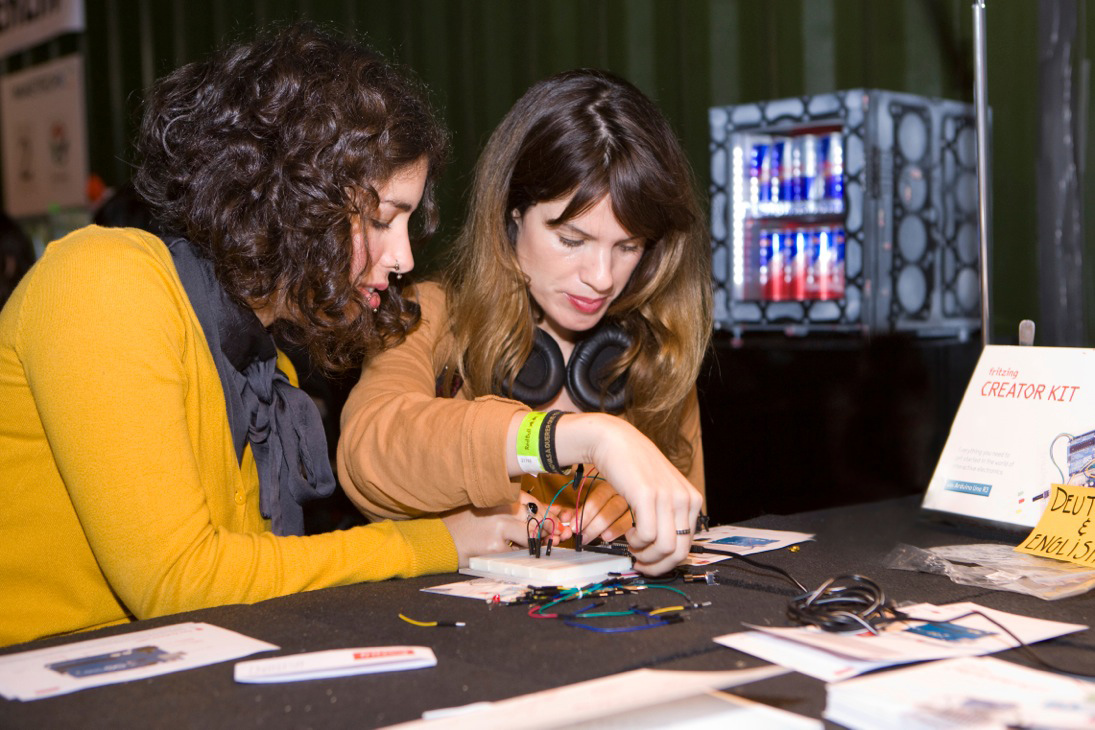 So, as you can guess, maker mood was in the air! Stefan and I prepared the booth with six Fritzing kits as we had prepared a little workshop to make the visitors familiar with Arduino and Fritzing. Soon after the first conference attendees arrived and the speakers started their talks – we then asked ourselves how we should do a workshop while being placed almost on the stage ourselves? Luckily the organisers Lizzy and René Herzer had thought of everything and used a concept I hadn’t experienced before – they handed out headphones to the audience and so everybody could listen undisturbed and to their own volume. Though I couldn’t listen to the talks anymore at least we now had some peace and quiet to do the workshops (besides that it is really awesome to go to the toilet and still being able to listen to the speaker on the stage…). 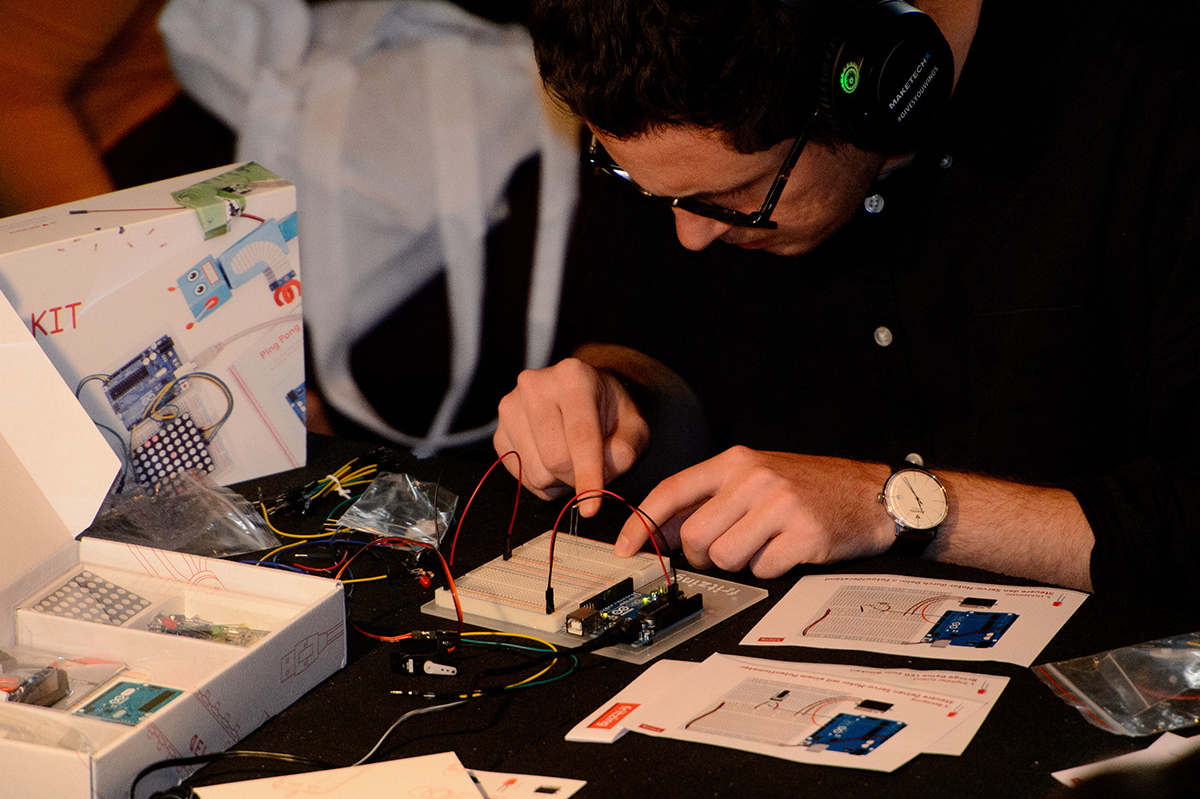 At first I was a bit nervous in assisting in the workshops without being a real Fritzing crack yet, but in the end it wasn’t necessary at all. Stefan took over the harder-to-explain bits wonderfully and I learned a lot myself by explaining how it all works. We had a very interesting mixture of workshop participants – some knew the Kits very well already and, after solving our tasks in a mere minute, grabbed our Fritzing book eagerly and started contentedly getting lost in the more complex exercises. What made me very happy was that there were also a lot of people who never came in contact with an Arduino before and discovered how easy and fun it actually can be while saying before „No, no, this is really not my strength, I could never do it in physics lessons.“ 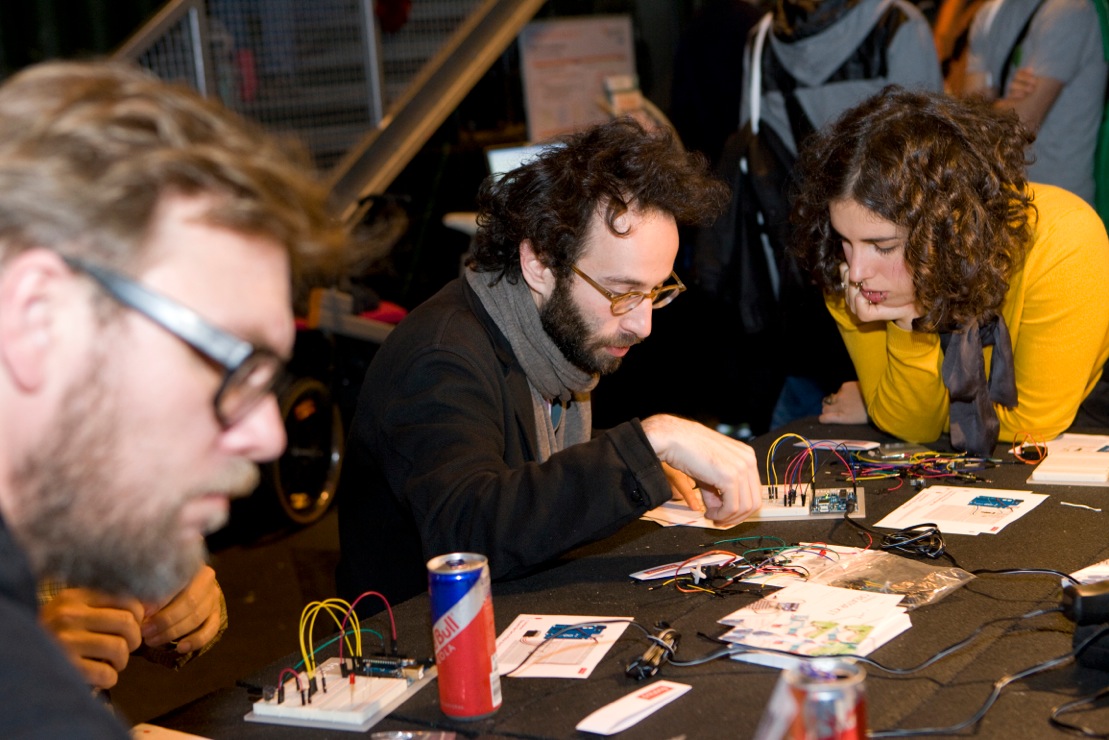 So we left in the afternoon to go back to work, armed with tasty bread rolls and a very good mood, with the feeling of not only us but many more people having had a very interesting and enjoyable Fritzing day. 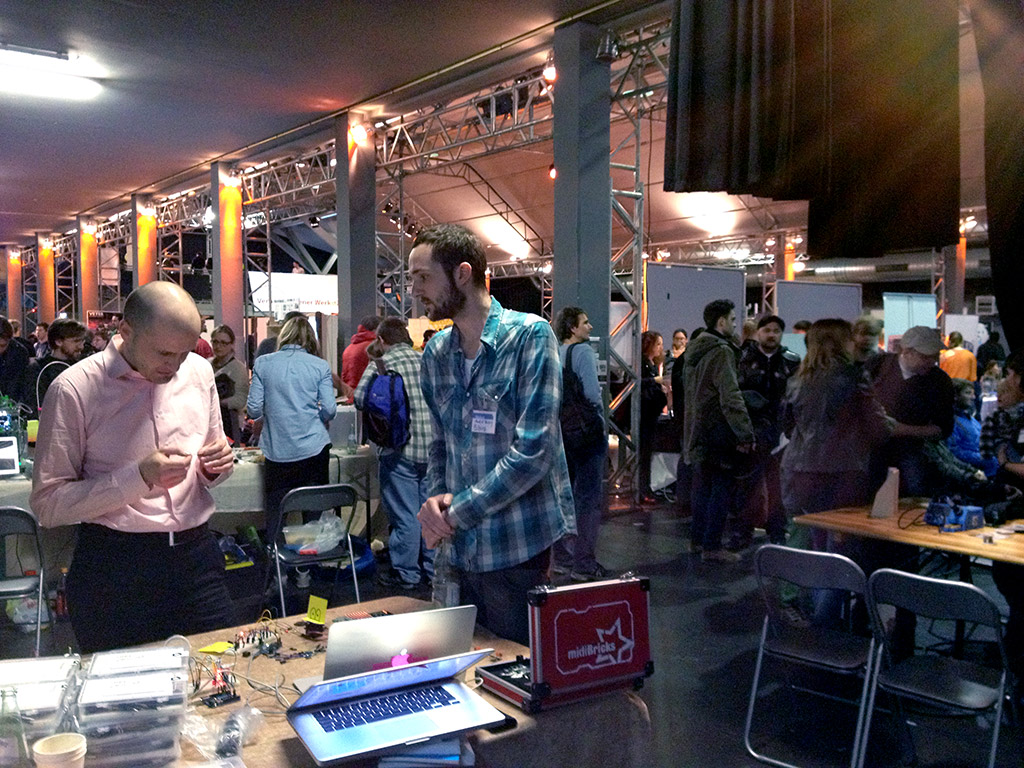 Our friends form Make-Munich are inviting to a christmas maker event. It will take place December 1st [1. Advent] and combine a Creativity-festival, a X-Mass-Market, fancy Maker Exhibitions [e.g. Chocolateprinters or 3D Printed cookie forms], Art, Music and Creative Workshops for everybody to join.