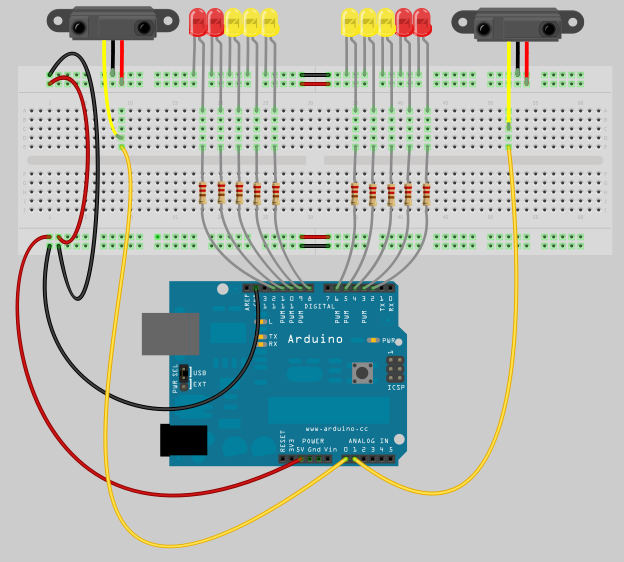 This is a screen shot from the Curvy Parking Assistant example sketch that comes with Fritzing 0.6.3.

These features are only available in breadboard view. The rest of this post will explain how to use them.

Wires Let’s start with wires.  As before, you can drag on each end of a wire, and it will stretch along with your mouse. You can drag out a bendpoint simply by mousing down somewhere on the middle of the wire and dragging.  Or you can add a new bendpoint by double-clicking somewhere in the middle of the wire, or right-clicking to bring up the context menu, and selecting the appropriate option.  To delete a bendpoint you can double-click it, or right-click to bring up the context menu.

Adding a curve to a wire is like dragging out a new bendpoint, except that you hold the control key down (Mac: command key down).  How the curve bends depends upon where on the curve you drag it.  To be specific, these are Bézier curves, which means that the curves are influenced by four points: the two endpoints, and two “control points”.  As you drag on a curve, Fritzing will display the control points to give you a better sense of what’s happening.   The image below is an example. 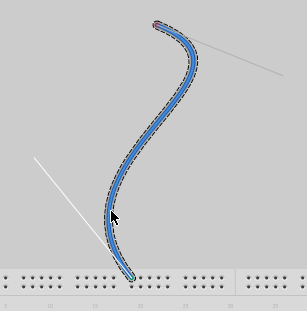 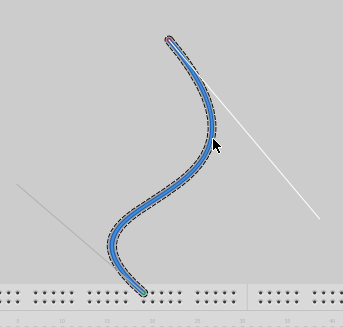 By the way, if you prefer curvy wires to straight ones, you can set that as the default in Preferences.  So in that case, the normal drag behavior would produce curves, and to make a bendpoint, you would hold down the control key (Mac: command key).

Rubberband legs A rubberband leg acts a lot like a wire with only one available end.  If you have a part with rubberband legs, each leg can be manipulated independently of the others.  Just as with a wire you can:

Another feature of rubberband legs is that it is possible to move the body of a part without disconnecting its legs.  For example, say you’ve dropped an LED onto a breadboard, and you want to change the position of the LED but leave it connected.  In this case, hold down the alt key (Linux: meta key) as you drag the part.  The legs will rubberband, staying attached to the breadboard as you drag the part body.

If you want to connect a rubberband leg to another part using a wire, then when you drag on the end of the leg, hold down the alt key (Linux: meta key).