One of the biggest and earliest requests for Fritzing was for it to handle double-sided (i.e. two-layer) boards.  For those who don’t know, a two-layer board means you can route traces between connections on both the front and the back sides of the board, so compared to single-layer boards, this can save hand-wiring after etching, and the board will be more reliable.

We are pleased to announce that double-sided boards are supported in latest release of Fritzing (0.4.0).  We tried to build in the minimal necessary functionality, and we’d like to hear your feedback about what’s still missing (and what’s buggy–we made a lot of changes from 0.3.19).  For example, though Fritzing 0.4.0 supports wiring on both sides, it only supports adding parts to the top1 (which is what you do currently).  If there’s a big demand for adding parts to the bottom, we will include this in a later release.

From a UI point-of-view, Fritzing is much the same.  In fact, to work with single-sided boards, there is no change at all: just run Fritzing as usual. Your old sketches and parts will be fine.  To switch into two-sided mode, go into PCB View, select your board, and in the Inspector palette, select “double-sided” in the combo box labeled “layers”.  If you’re already working on a project and want to switch it to double-sided, don’t worry: changing the number of layers from 1 to 2 will not affect any connections2. 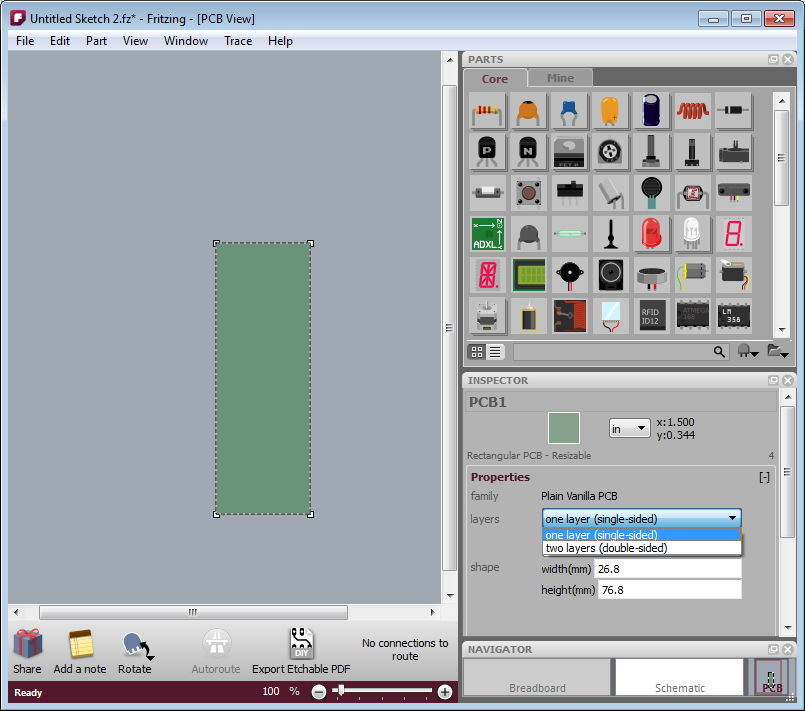 Figure 1. Using the inspector to change the number of board layers

The way Fritzing models it, in PCB View you’re looking down at the top of the board.  Through-hole parts (i.e. most of the parts that are currently in the parts bin), are shoved down through the board, and normally they’re soldered and wired on the other side: on the bottom layer.  But now it’s also possible to wire them from the top.  Therefore, connectors and traces now exist on both sides of the board. You will notice that traces and connectors drawn on the bottom are slightly darker than traces and connectors drawn on the top. 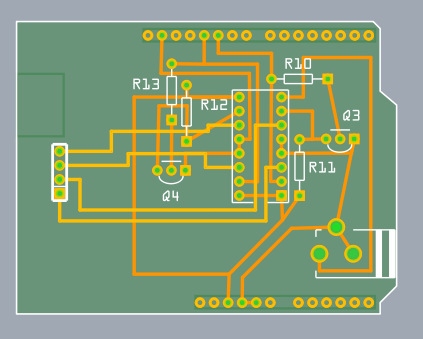 Normally, both top and bottom layers are active, so if you draw a trace between connectors, you will most likely draw it on the top layer (since the bottom layer lies beneath the top layer).  There are two ways you can directly choose which layer you’re working on.  The first method you may already be familiar with: under the View menu, hide the layer you don’t want to work with.  The same functionality is also available from the Layers palette (available under the Window menu), and if you’re doing a lot of switching back and forth, you may find the Layers palette more convenient.

The second method is new with this release of Fritzing: instead of completely hiding a given view, this method dims one of the layers and makes it ignore mouse clicks. 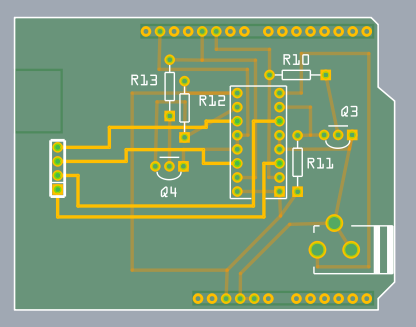 Although this version of Fritzing supports vias3 for manual routing, vias are not yet used in the autorouter.  In an upcoming Fritzing release, before trying a jumper item, the autorouter will try to route using a via.

1. For home-brew experts, SMD parts can be added to the bottom layer on single-sided boards.   2. Changing board layers will affect SMD parts, which will be disconnected, flipped, and added back to the other side.

3. A “via” is a plated through-hole.  It’s a way of routing a connection from one side of the board to the other.  In Fritzing, you can drag a via into your sketch from the Parts Bin.